India is a land of colors and thoughts - bright and vibrant. I’ve always loved the various art styles that have emerged from multiple parts of our country. Simple, colourful and full of life, is what the Indian folk art and culture is known for. If I weren’t staying in a rented apartment, I wouldn’t give it a second thought to fill the walls with such beautiful paintings. But what is it that makes the Indian traditional art styles so beautiful and elegant? What are rare Indian folk art forms ?

Today in this blog, we’re going to explore the very same thing. Though there are many different folk art forms - Pichwai, Kangra, Rajasthani Miniature, Tanjore, Kalamezhuthu, we will see the five most beautiful Indian folk art styles in this blog. Various folk arts were born in different parts of India that passed on over generations. Indian folk art has an identity of its own, that is cherished all over the world today.

While in one period they were used to narrate the stories of gods and deities, other periods saw it as a useful tool to communicate and share social ideas amongst the people. Art is seen as a silent messenger of information since time immemorial. Nostalgia, elegance, and absolutely captivating are some of the very few words that can be used to justify these artforms.

Born in Mithila, this art is mostly symmetric and geometric in mature. The origin of this art gives it another name called ‘Mithila art’. It is one of the most popular folk art forms, and there’s a legend that goes back to connecting this art with the great Indian epic - Ramayana. It is believed that King Janak wanted to portray his daughter’s life as a story-art, and that’s when this folk art was born. There are namely five distinctive styles of Madhubani - Bharni, Tantrik, Godna, Kohbar, Kachni. Madhubani themes mainly depicted religious deities and their life stories. This was used to take around the village and educate people on how their ancestors were. They are generally done on a freshly plastered mud wall or floors of huts.

But these days we find these beautiful designs everywhere. Women of today adore the shawls and sarees with these prints. One distinctive feature of this style is that the painting hardly has any empty space left around the main character. The entire drawing space is filled with drawings of either flowers or plants of various types. This is the reason why the painting often looks so ‘full’. Madhubani did not come out until the Britishers discovered a house full of such paintings. Let’s take a moment to thank them for accidentally finding our lost beauty! Gods and nature are the predominant themes of these paintings. 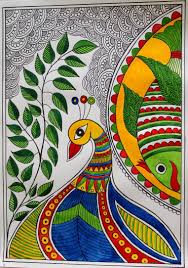 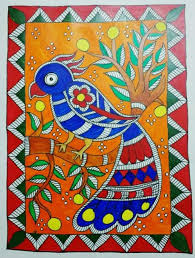 The name for this art comes from the base material on which this is done. These paintings are drawn on a piece of canvas or a handwoven cloth which is called Phad. It mostly depicts the images of the local deity and is carried over places across the village for worship. It is also called the moving temple. It is a traditional practice of storytelling through art. For artists like Kalyan Joshi, who has carried this art to this generation from his forefathers, this is more like a divine task than just a piece of art. This art style dates back to more than 700 years ago and hails from Rajasthan.

Traditionally vegetable dye is used to paint these pictures. This art has been the locals favorite for during the evenings Bhopas or Bhopis (the priest and his wife) would take around the scroll of these paintings The scrolls would be unrolled after the sunset and the storytelling would begin. The traditional Phad painting is made on a cotton cloth that is soaked overnight and plastered with rice floor and rubbed with a special stone to produce the sheen. The entire process naturally made with natural dyes, These paints are extracted by hand from flowers, vegetables, stones or so.

A typical Phad takes a few weeks to a few months to complete. It is considered a divine process. It is not until drawing the eyes of the painting that it does not come alive. Once the eyes are drawn, the painting comes alive and is ready to be taken across for worship. Few distinctive features of this style are that all the figures are flat and face each other unline other art styles where they face the viewer. Also, the size of each character is determined bu status and the role they play in the story. Uniquely curated, this 700-year-old art still lives on for its beauty and charisma. 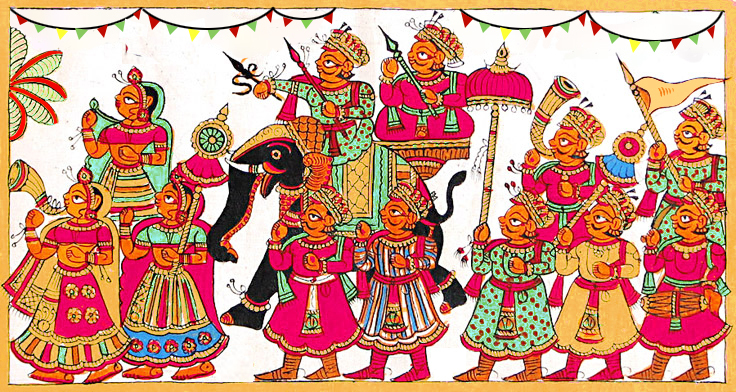 Read this Guide to Choosing the right Colour Scheme and enhance your paintings.

This beautiful piece of art emerged from the Western Ghats of India. It is one of the oldest art forms dating back to 2500 BCE. Simple yet elegant. If you observe these paintings, they mostly depict life in a village. It will kick in nostalgia for anyone who has spent their life in a village. It is the most natural form of art. It is done by the Adivasis of the western ghats. The art is mostly done on the walls of a house. And guess the paint - rice paste. How simple and a beautiful thought is that ! The ochre background gives the best effect to the whole art piece.

If you observe there isn’t anything complicated about this art form. It is all based on basic geometry. They only contain circles, triangles, squares and lines, and a few curves. The current day’s Warli is also done on paper by anyone. Warli art often seems to be like a magical world that symbolizes a happy occasion or a worry-free daily life in its paintings. Locals believe that these paintings can invoke the powers of the Gods. The modern age hasn’t forgotten this art for the generation X and Z find the class in its simple yet elegant design.

I wouldn’t mind my walls being painted in Warli. What about you ?

The name literally means ‘Kalam’, pen, and ‘Kari’, work which translates to artwork done with a pen. These designs are used to date on a saree or a beautiful shawl too. The two styles of kalamkari hail from Srikalahasthi and Machlipatnam. This art form is loved by all and has vibrant colors and never ceases to make anyone fall in love with it. This art form flourished under the reign of the Mughal sultanate in Golconda. With all that it is, Kalamkari is a piece of sheer beauty and elegance. The making process is, however, extremely different from any other artwork. The cloth for art is first washed and cleansed in cow dung, and milk then washed in normal water. It later goes through various steps to get it ready for the painting process.

The cow dung gives out a dull-shaded background. This 3000-year-old art form is prevalent, and so are the block prints that developed in the recent past.

Kalamkari is aesthetically pleasing and is by no doubt one of the most exquisite artworks ever. Women these days adore the intricacies in the design. The beauty that it is makes the art worth the effort it’s been through. 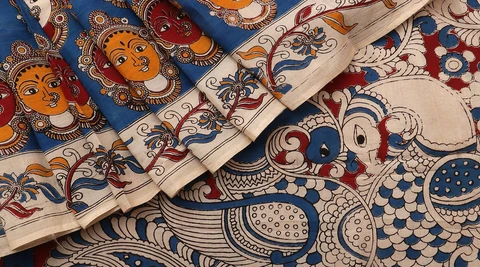 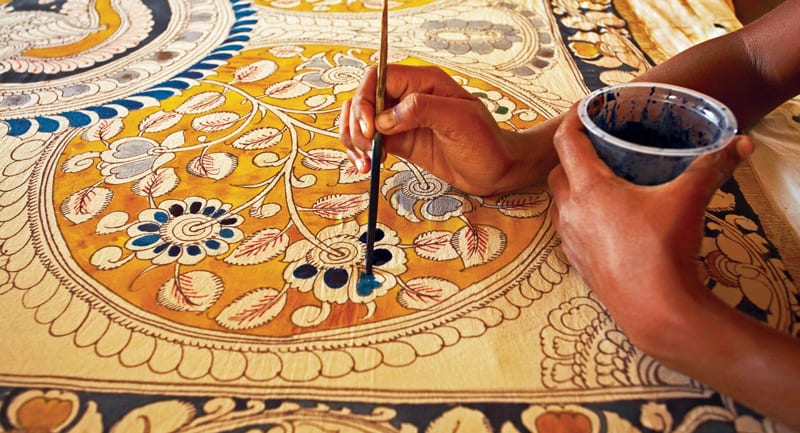 Do you know the eminent awards for Indian Art and Artists ?

Patachitra emerged in a small village in Puri called Raghurajpur. This folk art form is one of the most interesting ones. The Patta or the cloth on which the art is made is prepared by rubbing a select tamarind paste and sanding it with stones to create a leathery texture. The paintings are then done on it. The paints were mainly naturally acquired and are mixed with homemade glue and set in the sun for the shade to darken. Squirrel and mongoose hair tied in a bamboo stick is used as a brush, and coconut shells were used as pallets.

It was mainly the Hindu gods that were portrayed in the drawings. Art depicting the Jagannath and Krishna Leela were the most common ones. During the period of Debasnana Purnima, the idols in the Jagannath temple are believed to shower in many pots of water to combat summer. It is believed that post this, they fall sick due to which they do not appear to the public for prayers which are otherwise called the ‘Anasara’. During this time, the chitrakar come together to sketch the idol images for people to worship.

While some also drew them on the walls of their houses, they still are considered sacred. Pattachitra is one of the most captivating and gorgeous art forms in Indian folk art.

The beauty in these art forms lies not just in their origin but in how we take it forward for many more generations to come. It fascinates me to see how minimalist our forefathers were. Maybe its the unavailability of resources that made them make simple yet beautiful choices. And as people of this century, it becomes our responsibility to take them forward with pride and love. There’s always beauty and grace in simple things. Embrace it!

Checkout the Top 10 Artstyles in the World here !

What is your favorite art form? Let us know in the comments section below !